Not So Trivial Pursuit of the Perfect Book: Pop Culture Edition

Welcome one and all to the first ever edition of Not So Trivial Pursuit, a series of blog posts dedicated to the finer points in making a novel truly loved by its readers. Anything from what I’m struggling with in my current work in progress to what excites me about my favorite series.

The further I get into Dollhouse Daughter, the more I discover the complications of writing a novel set in modern day United States. While the novel began with an even more complicated setting (Revolutionary War era London), the ultimate debate dawned on me:

That is the question, so to speak. It may be an issue for the rewriting/editing process, but in the midst of my creative flow the question kept popping up. Is a pop culture reference a good choice here? Will readers understand  or even care that the yellow umbrella  in chapter 3 is a vague reference to How I Met Your Mother?

Some of the best novels that I’ve read over the years have used pop culture both to enhance the novel and add a distinction to the characters. One of the most recent examples is The Mortal Instruments Series by Cassandra Clare, where the “mundanes” use pop culture references that characterize the Mundanes and Shadowhunters as two groups of young adults coming from different worlds. It makes it easy to distinguish the characters with the use of pop culture, and it sometimes gives insight into the author.

While I can’t say much for Cassandra Clare’s love of pop culture, I know the author of one of my favorite series brings pop culture in from his own life. Kevin Hearne is a self-titled comic book collector and nerd, which makes him one of the most qualified authors to use pop culture in his writing. His book series, The Iron Druid Chronicles, is graciously populated with so many pop culture references that in any other setting it may be overwhelming. However, Hearne uses them in a purposeful and entertaining way.

Atticus O’ Sullivan is the 2100-year-old Druid that the series is based on and he has had plenty of time to acquire the knowledge of popular culture during his stay in the United States. From The Big Lebowski to Shakespearean insults, Hearne holds nothing back, and as a fan girl I appreciate his efforts. I have tried to space out my reading of the reading; well, space it out as well as my paltry willpower goes.

At the same time, Hearne is the prime example of how pop culture can add layers to a character. Atticus is 2,00o years old, and to conceal his identity he must blend in with the times. In this case, he must blend in with the nerdy subculture most 20-something’s hold near and dear to our hearts. It also makes it easy for us, as readers, to dive into a story rich with mythology and Celtic lore.

So, for my novel, I thought that it would help my readers to get to know me as a person as well as my characters. Cassie, my MC, is a Japanophile (new word, learned while watching King of the Nerds on TBS). In other words, she loves all things Japanese or about Japan. This ranges from anime, manga, food, and even an unhealthy obsession with Hello Kitty. It’s something a general audience is familiar with and the sub-culture can relate.

Although there is a heart-wrenching fear whenever I think of how badly this whole pop culture reference thing could go, I think of one of my newest and most favorite authors. Fiona Skye is a rising star in a sea of urban fantasy. Her novel, Faerie Tales, follows a modern day exhibition of the magical world to humanity. Skye’s MC, Riley O’ Rourke is a fierce, in-the-know reporter, who just happens to be a werejaguar. Skye and Riley are the perfect example of a blossoming author using pop culture references to reinforce the strength of her characters and the intelligence of her audience.

I caught on fairly quickly with Skye’s light use of pop culture. It was just enough for me to get Riley (who is from Pittsburgh, so I felt especially close to her when she mentioned the Penguins) and the world in which she was living. 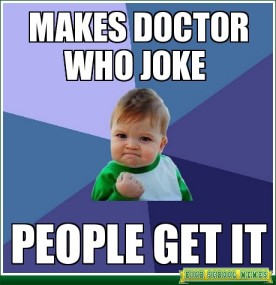 Ultimately, it was the help of Skye’s recently published book that convinced me pop culture was the best option for my novel. It doesn’t have to scream 2011 with the top 40 hits and the latest model of cell phone used, but I do think that my readers will benefit from the little easter eggs. I mean, who doesn’t want to get a line from Doctor Who in the middle of the book they’re reading. I know the geek inside me does!

So, we’ve established that using pop culture can be both beneficial and potentially hazardous if used too much or without purpose. I think I can place references in there, like the yellow umbrella, without it ruining the entire piece. It makes sense that someone who is immersed in the geek culture would transfer that love into their work. Why else would authors like George R.R. Martin be selling millions of books if his love of Tolkein didn’t show through his writing?

I don’t have to commit to everything or nothing right now. It’s not the “revise until my brain falls out phase” of editing or the part where I change out the crappy words in my book for much better choices. Right now it’s just establishing who I am as an author and how that voice should show through in my writing.

At this moment, the trivial use of pop culture is important to how I weave my story because without it, I lose the fundamental quirks that make my characters and my world different from the hundreds of books being published as we speak. In that sense, this could be a life changing decision for me and my manuscript.

For those of you writers out there with a setting of Earth, modern times, what do you think about pop culture references. Important or Trivial? A lot or A little?
I would love to hear what you think, so please comment below. Of course, that is after you check out my cute kitty pictures. 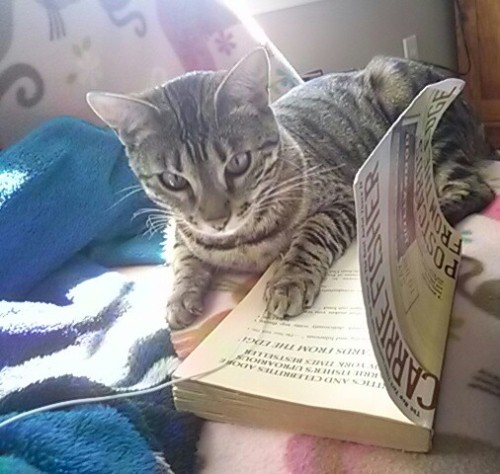 Who doesn’t love a kitty reading a book!

Had enough of my super cute cat yet?

6 responses to “Not So Trivial Pursuit of the Perfect Book: Pop Culture Edition”