Bringing Characters to Life: Your Book As a Movie

Every writer has done it at one point or another. Even without meaning to, we all imagine what it would be like to see our story, our characters, our heart on the big screen. It typically happens after the book is out in the world, published and gathered a following, but for me the daydream came after I shared my completed work with a very trusted friend. With at least 30 books being made into movies just in 2014, it’s not uncommon to consider a book potentially being made into a movie after its completion. IF you climb your way onto the NY Times list or achieve fangirl/fanboy status with a large enough demographic (the two things aren’t mutually exclusive) because both will ultimately lead your book(s) down the path to Hollywood greatness. 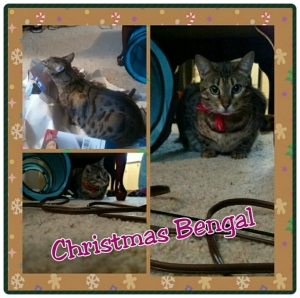 While visiting family for Christmas, some inquired thoughtfully about what plans I had with the manuscript now that I’m nearing the completion of my Master’s degree. Besides asking about the title, subject, etc. of the book, they  were anticipating on my novel being so popular that it could be the next Hunger Games. I’d like to point out here that this is not my goal. The Hunger Games are phenomenal movies, and based off of stellar YA books, but my plans or writing is never in attempt to be the next “whoever”. Sure, Dollhouse Daughter is YA and  it has elements of fantasy much like the book to movie versions making waves in the box office.  However, that wasn’t my original intentional. I wrote Cassie’s story (and Marge’s) because they deserved a chance to be heard.

And yet, the thought of seeing my story on the big screen is thrilling. My characters, my funny bits of dialogue spoken by actors trying to capture the same essence I wrote into the book. It would be an accomplishment beyond my furthest expectations.

Now that the book is nearly finished (pending revisions/epilogue) I want to share my inspirations and casting choices if the powers that be would decide my book should be made into a movie. Please note, some characters will have both inspirational photos and popular actors shown while others have inspirational  photos only. In addition, the choices are almost exclusively made in regards to physical descriptions. So, without further delay, I give you:

Left is actress from Newfaces.com and right is Elle Fanning

Inspiration-This was the first picture I found that reminded me of what my brain had conjured for Cassie. It’s nowhere near exact, but the white blonde hair, bright, clear eyes, and a simple beauty of budding pubescence.  The actress was found on New Faces, where most of the “inspirational photos” listed in this post have come from, and provided a foundation for what was cooking in my brain.

Hollywood-Elle Fanning is my choice for Cassie. She has a sweet demeanor and an innocence that fits perfectly for the personality of Cassie. And as fate would have it, I’ve found a photo of her wearing a summer romper similar to the one I imagined Marge dressing Cassie in Chapter 5. 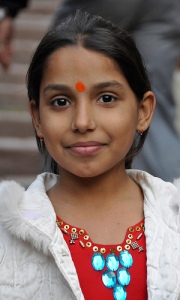 From New Faces or Google

Inspiration- I found this girl, I think on New Faces also, but I’m not sure. She was actually the exact image of who I expected Cassie’s bff to be even down to the red bindi on her brow. I haven’t found a Hollywood comparison, but we’ve got some time considering the book hasn’t even been published. Maybe I should be thinking Bollywood instead of Hollywood for the actress choice. I didn’t want to make her stereotypical for someone of Indian descent, but I absolutely adore the Bollywood and more traditional Persian fashion that it was impossible not to include a character as straightforward as Mita.

Inspiration-This one was difficult. Finding the right look for Marge was a careful blend of strong, feminine features and crazy eyes. The actress found fit most of the description I wanted: strong, angular cheeks with eyes that command attention and wavy light hair that could have easily been teased and out of control when she was younger.

Hollywood-This choice was even more difficult, but my good friend mentioned at the beginning of the post came to my rescue. During our discussion of premium A-list actresses to take on the demands of a narcissistic, obsessive compulsive  mother whose defining moment in her personality was finally beating her mother (both physically and emotionally) into submission. Glenn Close is perfect for the role. After villainous characters such as Cruella De Vil or Claire from The Stepford Wives, Glenn Close is uniquely qualified to play my deranged Marge.

Inspiration from New Faces and Jason Bateman on the right

Inspiration-This actor from New Faces captures the roughness I was hoping to express with Henry. His history of working in the coal mines hardened him in a way. He even kept the disheveled look even after he was promoted to a project manager position (cozy office job) almost as a physical manifestation of the difficult marriage with Marge. And yet there are times where he is allowed to show emotion when it comes to Cassie and his father. I think the combination of these physical descriptions and emotional experiences will make Henry a pleasing character for the audience.

Hollywood- Jason Bateman.  Good looking, talented, and capable of the hardened, stoic persona that Henry gives off while also managing to be heartfelt and utterly adorable when needed. Other than that, there’s not much else I could ask for. Just put Jason Bateman in some flannel and work boots and give him a slight Pennsylvanian accent and he’s perfect.

Inspiration from New Faces and Matt Kane on the right

Inspiration-Like most of the inspirational photos, I found this fellow at New Faces, and for the life of me never wrote down the names. Yet, he captures the gorgeous perfection I wanted for the Brooks golden boy. His hair naturally brown, but dyes it black after meeting girlfriend Miranda who requires a specific “look” for her boyfriends.

Hollywood-From Switched at Birth and Once Upon a Time, Matt Kane is a prime model of male physique to play Nathan. He, in all honesty, doesn’t require much in the way of acting prowess. He’s just a regular 20-something who’s trying to get along with his family while also trying to separate himself and grow up.

Now that we’ve covered the main characters before the Brooks move to Georgia (spoilers, I know), I wanted to show case some of the more prominent characters in the rest of the story.

Starting first with my antagonists, Jessica and Clarence O’Donnell. Enter two perfect specimens of Southern grooming, accentuated by lots of money and encouragement from society to be the best out of everyone. And then add one, uncomfortable, slightly introverted, neglected young girl (Cassie) to the mix and you have instant teenage drama.

Jessica didn’t have an inspiration to begin with, so I ended up finding her Hollywood match from the start. Bella Thorne is perfect…literally.  Cassie refers to Jessica as a Barbie in her internal dialogue, which can only accentuate Jessica’s perfection. This picture to the left is as close as I could get to what I thought she’d look like. My only change would be to lighten Bella’s hair to a fair, strawberry blonde.  And the eyes. Both Clarence and Jessica have the same shade of blue eyes, so we’d have to affix both Thorne and Brodie-Sangster with different colored pupils. No biggie in the way of movie magic.

Now onto Clarence, who by the picture (above right) was an adorable young boy in my mind, and perfect for my leading lady to fall for, right? Who doesn’t expect a YA book to movie to have a teen heartthrob that the main character struggles with at first and then  grows to love within the confines of the film. And that’s what makes Clarence so clever. Teen heartthrob is a must, and so when it came to choosing the Hollywood actor for my book to movie version, I wanted someone heartthrobby enough to capture the hearts of young movie-goers, but able to crush their hearts with his arrogance (acting). Thomas is perfect for it. His work in Doctor Who as a bratty school boy is an ideal foundation for Clarence.

Next is a much more positive character– Jean Abellard. 27 years old. Caretaker. Haitian. Friend. Lover. He’s the kind, Southern man that keeps Cassie grounded and allows her to be herself while at home with people who don’t really know her. My inspiration skipped straight to the actor I’d love to play Jean sans hair in this picture–K.C. Collins from my favorite show, Lost Girl.  He’s a phenomenal Canadian actor who would capture the grace and casual handsomeness that I had hoped for Jean.

And last, but certainly not least, my favorite character–Azalee Longchamp-26 years old. The short (least spoiler-ridden) description is that Azalee is the shining light in the dreariness of Cassie’s existence. Take the compassion of a mother who lost a child too soon, add a little mystery, a little vodou magic and faith, sprinkle in a bit of spiritual intervention, a dash of calculated recklessness and what do you have. A gorgeous, confident vodou priestess in the market for a young girl to teach the ways of the world and keep her on her toes.

left is inspiration, middle is Kat Graham, and right is hairspiration for Azalee

We’ll start first with the inspiration. In the prologue I describe the below outfit in what hopefully is an aptly written description that isn’t too specific or too vague (that’s really the dream isn’t it?). And so I direct your attention to the full-figured photo above left for the outfit that first inspired my vodou priestess. Next to that image, in the center, is my Hollywood choice–Kat Graham. She’s currently most notable for playing the witch Bonnie Bennett is The Vampire Diaries, which makes her uniquely equipped to handle supernaturally-based roles. She’s the perfect skin tone, age, temperament. Well, she’s everything. The photo to the right is the hairspiration for Azalee’s beautiful locks. While I’d like to say she would keep Graham’s dark locks, the box braids on the right in that warm caramel shade is exactly what I pictured for Azalee. Granted, there were also little beads and many many more braids, but that is neither here nor there when your imagination can fill in the blanks.

Alas, there was one other actress who could have played Azalee. Angela Bassett would have been brilliant for the role, but I wanted to shy from the current portrayal of Marie Laveau and New Orleans voodoo in American Horror story. It is my most treasured goal for Dollhouse Daughter to highlight the traditional vodou found in Haiti, which can be seen in the different spellings between the Haitian vodou and New Orleans voodoo in this very post. I want to celebrate the wonder and glory of the vodou faith and beliefs, which can get muddled in the theatrics of the New Orleans influence. I love them both, but Azalee and co. come from Haiti and represent a purer form of vodou that has captured my heart in the years I’ve researched and written this book.

In the end, the actors, the photos, the inspiration is simply another way to bring the story and characters to life. I, by no stretch of the imagination, assume that my book will be good enough to make it onto the big screen. But it is a dream. A dream that one day I hope you, my lovely minions, may support and help me achieve. For now, I hope you enjoy this post and look for some excerpts of the novel to come in the near future!

Lastly, I leave you with an adorable kitty selfie. Happy reading/writing! 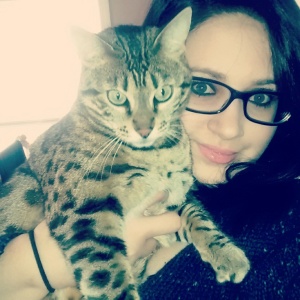