The Gathering Week One

Well, the first book I have to read for my residency with acclaimed western writer, Jane Boyer (Candia Coleman) is The Gathering by Anne Enright. Now you must be thinking, what is a western writer doing assigning an Irish writer to a bunch of first years (freshman so to speak)? The answer would be my upcoming trip to Dublin, Ireland in June. Why Anne Enright? Because she could very well be there during the residency and she is a fantastic example of Irish writing. 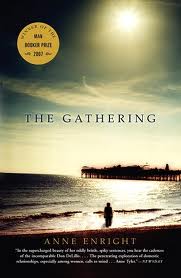 I’ve had some experience with Irish writing. Mostly James Joyce, Jonathan Swift, John Millington Synge, and William Trevor. My experience first came in a Irish Short Fiction class during my junior or senior year of my undergrad. It would have been an amazing class if it had not been at 8 o’clock in the morning three days a week. There is just something about 8 a.m. that makes the brain want to work less. It was interesting nonetheless and I expect my time in Ireland will be much better than sleepy mornings in the basement of the library.

Returning to the purpose of the post, I have spent the last few days starting Anne Enright’s book.  The book is set in Ireland and England, so far. To me, they are exotic enough that just the areas she describes excite me to read more. As much as I enjoy her use of vocabulary and detailed scenes, I force myself to slow down. Too frequently, readers forget how to read slow and simply skim over the words only processing half of them. My friends and family may think I’m a fast reader because I finish books quickly, but that is not the case. In fact, I would describe myself as a slow reader on purpose. I want to savor the moments of a book whether it is for school or for pleasure. Reading shouldn’t be a race to get to the end of the story. A book should be read at the pace that it’s written.

For example, Carrie by Stephen King, I read in one sitting or a few hours. It was relatively small for a Stephen King novel, but the fast paced nature of the story is what led me to read it quickly. The author somewhat dictates how fast or slow you read the book, but the story also does that.  For the books I’m required to read for school, though, I deliberately take my time to savor and analyze the book. As I have  learned from my first residency, there is a difference between reading as a reader and reader as a writer. I struggle automatically to differentiate the two while reading.

However, I’m not alone as it is a skill acquired with time and practice. It is easy to enjoy a story and read for pleasure. It is another to read from an academic point and analyze potential literature for archetypes and common themes. It is another point all together to read as a writer. It is completely different to read thinking about style, voice, and point of view. To understand how a writer wrote such a fantastic story from the inside is a task not easily handled. So, I have only delved 1/5 of the way through the world Enright has created.

I am following an Irish family as they suffer through one of many deaths. The main character, Veronica Hegarty, is suffering most from her brother’s suicide. Although, from the first few pages, their deranged mother seems to be suffering more than all of her remaining children combined. I think the casual nature that Enright brings in the dysfunction of the family appeals most to me. Everyone thinks they have the most dysfunctional family, until they look at the house next door or down the street. It is that familiarity that your family infuriates you (Veronica being the responsible one and having to take care of all the arrangements) and soothes you (hasn’t happened yet, but I hope it will) without you even realizing it. She depicts a playful relationships with the past and present of Veronica’s life in addition to an imaginative past of her grandparents’.

I am struck by how quintessential family can become in just a few chapters. It doesn’t have to relate at all to your own family because people always find similarities in the smallest things. It is simply the struggle of dealing with family and death that makes this book so easy to connect. Two elements that in one way or another shape every human being, every living creature on the planet. I look forward to each page, attempting to understand the bits of Irish culture embedded in the  story as well as the overall feeling of Enright as a writer. If I do have the chance to meet Enright, I will surely faint for the sheer fact that she is an acclaimed Irish writer. More importantly, I will again be in awe of those much more experienced and eloquent doing the most valuable thing in the world, writing.

So, I leave you reader to return to The Gathering and coincidentally my cup of Irish Breakfast tea. Hope you will check out this little piece of Irish life as I prepare to write a paper about it.

The Author Near and Dear to My Bleeding Heart

The inspiration for a writer can come from many places, but a sure fire way to know why a writer writes can come from his or her favorite author. Upon looking at me or some of my writing, you would never guess I am a huge fan of  Stephen King, a master of horror, fantasy, and science fiction. His career has astounded me and given me hope for my career. He spent most of his life writing and doing at least two unrelated jobs to support his family. His short stories were published in magazines until 1973 when his first novel, Carrie, was published. It was then that his writing career became an ongoing one. He would continue to write novels, short stories, and collections for decades.

I first read King in high school. We read his novella Apt Pupil and Rita Hayworth and the Shawshank Redemption.  I was immediately drawn to his ability to develop several main characters in extreme detail. From that point on, I vowed it would be my life’s goal to read everything he has written. So far, I have only made a small dent in the huge list of works he has written.

However, the books I have read encourage my own writing and keep my opinion of King positive. From his first, Carrie, to his most recent book, 11/22/63, King continues to surprise and horrify me.

For the haters, he doesn’t invoke shock and disgust lightly. There is a delicate nature that you must place horrifying terrible things. The fact remains that the readers of 2012 are not phased by gore and pain anymore. What would horrify and scare people 40 years ago when King was first publishing is not going to affect the readers of today. It’s sad that video games and action movies have made violence and killing more acceptable, but the horror King artfully places in his books is not appreciated by most of the public.

To me, there will always be a shock to what King writes because humans need to be shocked at what could possibly happen to them. Although his supernatural elements (time travel, magic, demons, ghosts) elevate the story to a different level, the underlying themes to his stories ring true in all of us. Kujo,  fighting for your life against a rabid animal. Under the Dome, minus the mysterious electrified dome, the fear of a town cut off from the rest of the world is a very real possibility. Those elements are what make King’s stories terrifying. They could in one way actually happen and that slice of reality neatly tucked in between vampires  scares the crap out of readers.

That’s what I love about him. He understand the human condition so well that he uses our worst fears or qualities against us. He reminds us that life is not all puppy dogs and rainbows. That bad things happen and only you can change the  outcome of a bad situation. Every story I read of his gives me the drive to create the world like in the Dark Tower series or focus on place as he does with his home state of Maine.

Although King has met criticism by many, he is revered and loved by more for his dedication to the craft. After reading his memoirs On Writing, I told myself I would be just like King. Writing every day until I die. The funny thing about writers is that we need to write to survive, and even in the face of almost death we still find a way to write. In 1999, King was hit by a van and subsequently decided he might retire. It was difficult for him to sit down to write and his energy wasn’t high.

Yet, a few months after finished physical therapy he was writing the memoirs I just previously mentioned. He has continued to grace the shelves virtual and physical with insightful stories of human life. I hope that he has many more ideas left to write because I don’t plan to stop reading him now. He has written over 50 novels under his name and Richard Bachman. He has published almost 10 collection and even some non-fiction.

King has and always will be my inspiration for writing. I will use him as encouragement, for advice, and a guide through the tough world of writing.

Have you read Stephen King? If so, what books? Did you like his stories, why or why not?

A collage of King's amazing works of art. Not my collection, but someone with a lot of money

The Dark Half (most of it, had to return it to the library)

Lisey’s Story (about half)

On Writing: A Memoir of the Craft

Rita Hayworth and the Shawshank Redemption