The Terrible Case of the Research Jitters

As one of the most influential genres in all of the written word, science fiction has become the genre of the speculation. For humans, speculation and inquiry are the two most important aspects to our intellect because it leads to the discovery, and invention of the most amazing things ever created.

The genre is so embedded into the culture of humanity that we have been taking ideas from science fiction stories and creating innovations for the last century.  Science fiction is so important to write that the following quote is the only reason I need to write as much of it as I can:

Rod Serling‘s (narrator of The Twilight Zone) definition is “fantasy is the impossible made probable. Science Fiction is the improbable made possible.” 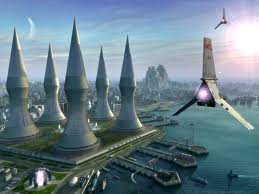 While most speculate the first true science fiction book, I would like to contribute the circle of contributors. These writers have made the genre what it is today, a magnificent support for the advancement of humanity.

Mary Shelley, H.G. Wells, Jules Verne, Jonathan Swift, and many more have opened a door to eternal truth and speculation. You see, science fiction answers the ever-asking question–what if?

What if there were giant holes in the universe that had such a high density that its gravity simply took everything  near it and obliterated it. Black holes-the existence has been known to man for only a short time. Yet, the idea that black holes exist was formed in a fiction book. It’s crazy to think that some of the marvels like the submarine were one imaginative objects in the plots of books. It is here that I begin my attempt at a very science-y fiction story.

Earlier this week I described the setting for a horror, and the important of setting in place in that genre. When it comes to science fiction, however, it is the research that creates the most believable story. There is no need to put the  most extravagant idea down on paper and expect it to be invented. What makes science fiction loved by millions is its ability to be realistic and potentially happen in the future. For most writers, the constant research is just a part of the job. However, for the science fiction writer, a background in the science is almost mandatory. Arthur C. Clarke is one of the big three of science fiction and his background in radio and satellite communication allowed him to write phenomenal books that transformed the genre. 2001: A Space Odyssey opened our eyes to the future of space travel, AI, and remarkably–tablets used by thousands around the world today. He had such an influence they named the geostationary satellites after him.

It makes sense that the writer of science fiction should first and foremost be a scientist, but where does that leave the rest of us? My degrees will be in literature and writing, not physics and bio-mechanics. So, what gives me the right to say I can effectively write science fiction on things I don’t understand completely. Well, the answer is in the research. While I may not do as much research for say a romance story, I will always do research for my stories. It is a dedication to learning and Socrates’ philosophy that we are all ignorant. The world is waiting for me to discover the truth in it, and I will be damned if ignorance stops me from writing the story in my head.

This takes us to my research. For some non-writers, it may seem like a simple task of googling a few facts and then pounding out a novella. Regrettably, too many people have the mindset that it isn’t difficult to write about things if you know a few facts. However, this is not the case when it comes to writing. If I am taking a test on say the most conductive metals, I could just rattle off silver, copper, and gold. If I want to write a story that uses this simple fact, I must understand what it means to be a conductive metal, how it behaves, and which ones do what better. Not so easy, huh? This research may take a few minutes to an hour, and only provide me with enough information to write a sentence or two.

I wish I could ask the big three of science fiction what they did when they were writing outside of their field, but alas it would be pointless. I must find my own way of developing the science aspect without the years of experience. Lucky for me, learning is a game in itself, so I have some fun late nights ahead of me. For science fiction writers out there–how do you cope with the research jitters?

Do you take it one step at a time or lose yourself in the science to write the story?

Share how you do research for a story, and HAPPY READING AND WRITING!

Fiction is a genre stemming from reality. In some way, fiction derives from truth and changes in the eyes of the writer. Whether it be an experience from the writer or a memory from someone else, fiction comes from something we know and changes to become something different.

Science fiction, however, is a type of fiction where we claim to know how current technology and science will transform in a different reality or future. It can be a parallel universe or 1500 years in the future. Yet, the alterations made in science fiction stories are not just musing of an author’s wild imagination. Many of the devices, inventions, and discoveries in the most famous fictional stories have been predictions for real world events.

Today, I will take on a journey through the minds of the best future tellers known to mankind…science fiction writers. We will discuss how questions of the universe and space were answered in stories, years before we actually discovered them. 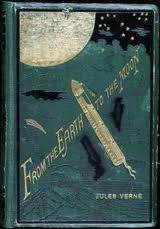 Jules Verne's From Earth to the Moon

We begin our tour of science fiction predictions with Jules Verne. He was a French writer living in the 1800s and made drastic predictions of space exploration that eventually came true 100 years later. In his book, From Earth to the Moon, Verne described down to mind-boggling detail the trip to the moon.  The launch site and water landing of the capsule are eerily close to what happened in reality. Even the material the capsule was made of (aluminum) and the number of men on the voyage (3) are similar to what we experienced in 1969.  Verne’s book was published in 1865 and he was so precise in his details that the fictional capsule was named Columbiad. Drop the d and you have almost an exact prediction of how man got to the moon. 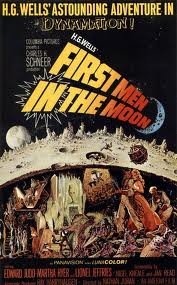 H.G. Well's The First Men in the Moon

Forty years later, another legendary sci fi writer, H.G. Wells, wrote a similar account of moon landing in the 1901 novel, The First Men in the Moon. While H.G. Wells’ predictions were located more on Earth, we’re hoping his prediction of time travel will soon be upon us.

The next precognitive writer is Arthur C. Clarke who commented not only in his fiction, but in scientifice journals made predictions about technology. In 1945, he had an idea of communication through satellites that synchronized their orbit with the Earth’s equator (geostationary satellites). The idea was coined first in 1928, but was made popular by Clarke and 20 years later it was made a reality. They are affectionately known as Clarke orbits for his faith in the technology.

Through his book, 2001: A Space Odyssey, Clarke was able to give a realistic experience of what happens to a human body in space (while other science fiction movies over dramatize the event) and even mentions the existence of a black hole on one of Saturn’s moons. Although it is not recognized as such, Clarke comes back to the black hole idea in his story the Black Sun in 1956. Over 10 years before the coining of the term black hole, Clarke manages to use it in his stories as a normal aspect of space life.  He even goes on to predict in 2024, that we will use infrared signals to find an advanced civilization at the center of our galaxy. What is most unsettling about this prediction is that infrared telescopes are being used as we speak to locate stars and planetary bodies, which could someday return with intelligent life.

Now these three men are part of an elite group of science fiction writers who have been able to accurately describe events and inventions that will eventually be created. It is insane to think that black holes and satellites were once figments of a man’s imagination and now they are truths we accept in reality.

To aspiring speculative and science fictions writers, it takes a lot of knowledge to become as legendary as these men. However, it is not impossible to fill their shoes. It is important to focus on what we know now and project what could potentially happen in the future.

I am shocked and proud to know that fiction writers (in essence liars) have been absolved of their mockery because their predictions have come to pass. It is comforting to know that writing  entertains, incites emotions, and helps shape the future of our species.

What do you predict will come to pass in the next year? The next 25? The next 100 years for humanity and our technology?